Alia Bhatt and Ranbir Kapoor got married on 14th April 2022 in a private ceremony at their Mumbai home. They have been making a headline for the past month. From fans to paps everyone wanted to know when are these cute love birds getting married. Yes, the day has arrived! There were many hints that are being dropped about their marriage in the past few days.

Today, we are going to highlight the best fashion moments of the couple which are setting trend for fashion couple goals 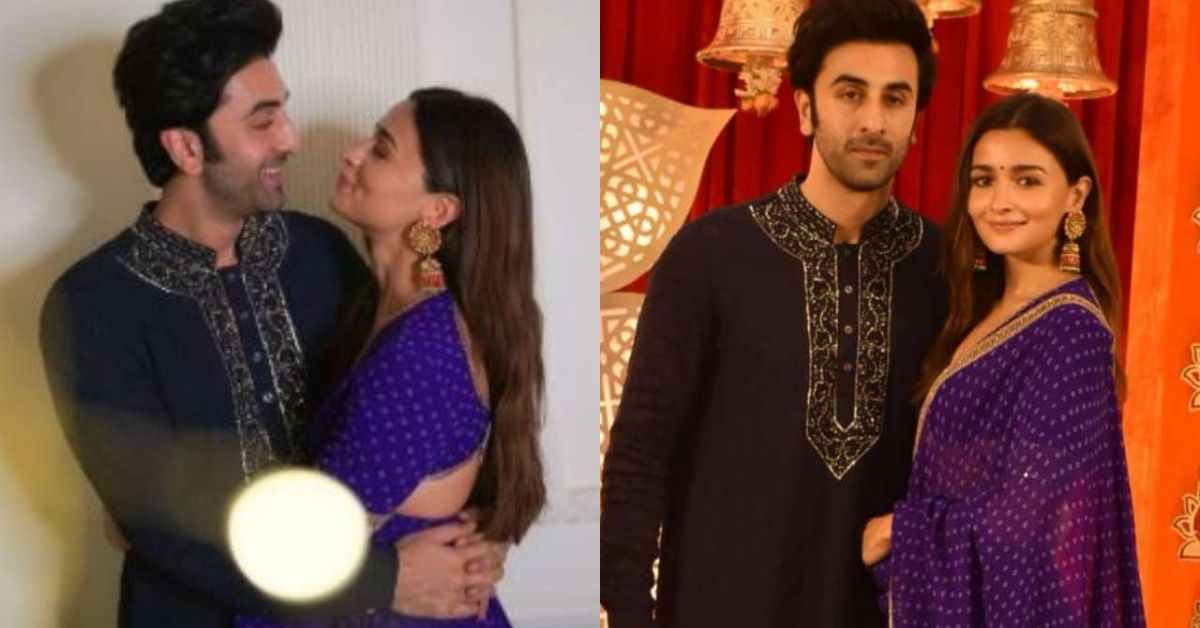 During Diwali, last year Alia Bhatt and Ranbir Kapoor shared a picture hugging each other. Ranbir Kapoor was dressed up in an Indigo blue embroidered sherwani and pathani pants while Alia Bhatt was wearing a Sabyasachi bandhani lehenga. She completed the look by adding ornate gold jewels. The couple’s outfits were complementing each other and that was the best part of the outfit. 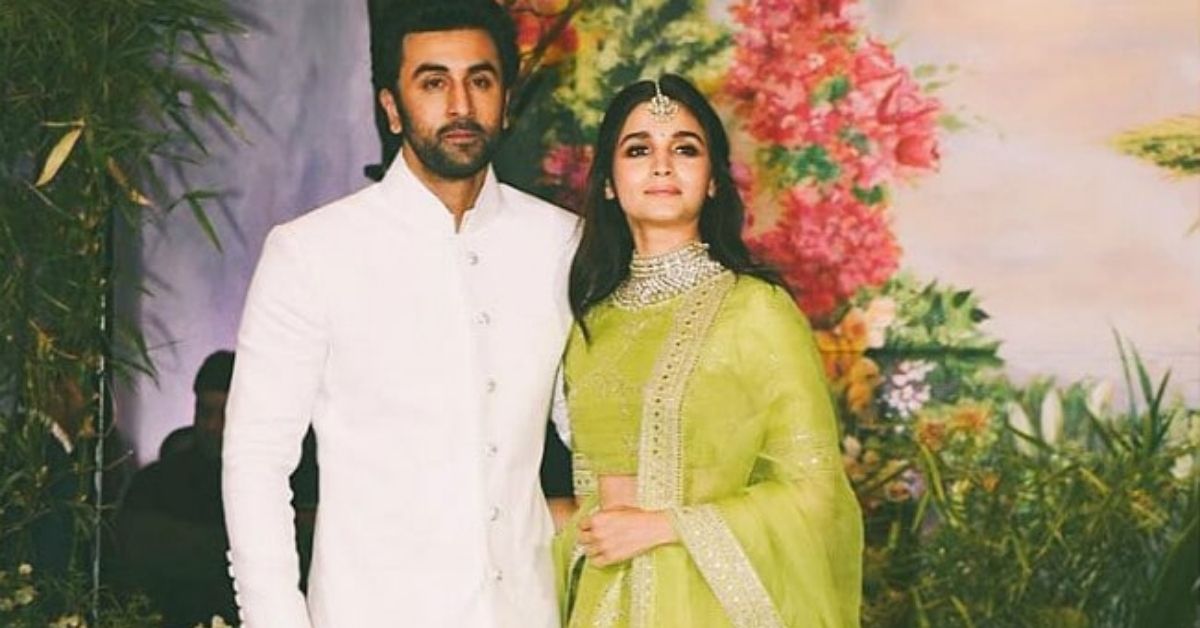 The couple made their first public appearance at Sonam Kapoor and Anand Ahuja’s wedding reception. The couple created a buzz all over the internet for their outfits and their relationship. Ranbir Kapoor was seen in a white and black sherwani with detailings. While Alia carried the lemon green-colored lehenga with silver embroidery by Sabyasachi. 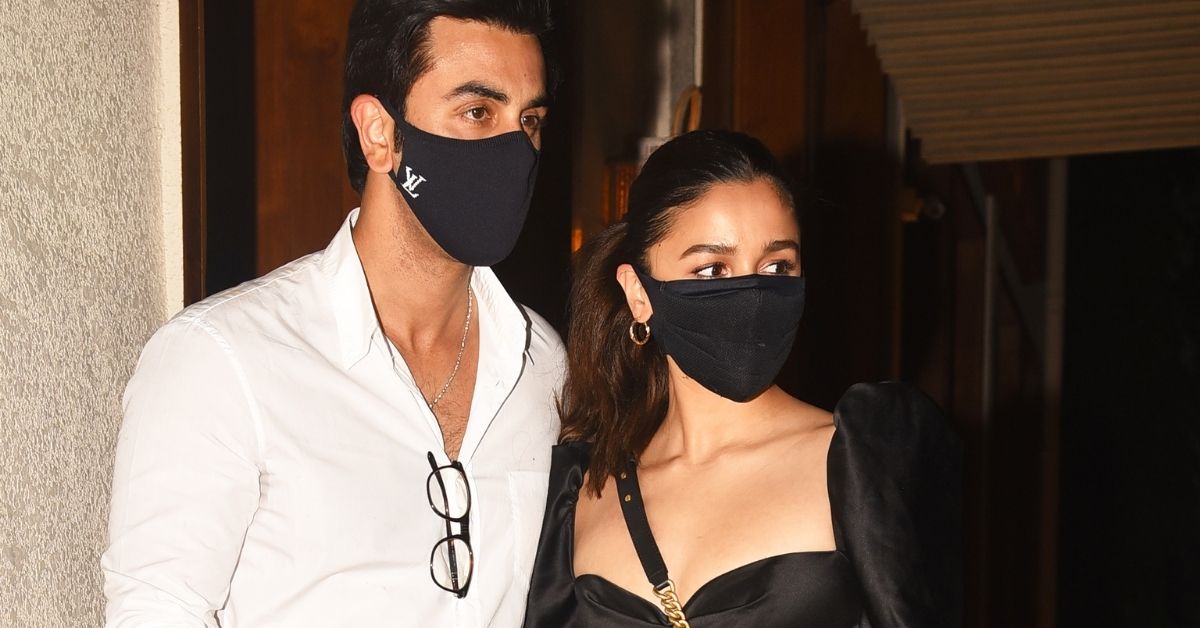 Alia Bhatt and Ranbir Kapoor attended the birthday party of Deepika Padukone. For the birthday party Alia picked up Black jeans with the flared hemline and paired them up with a black crop top. To complete the look she wore high heels and carried minimum accessories. Ranbir Kapoor was complementing her love by carrying a white fitted shirt with black denim pants. 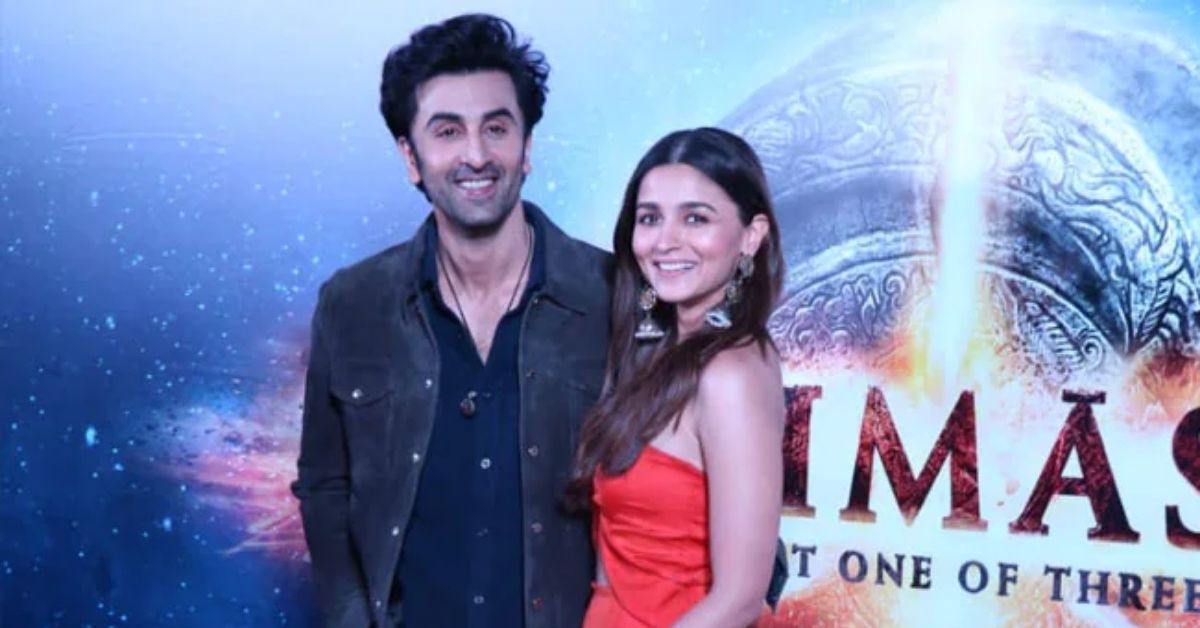 Alia Bhatt and Ranbir Kapoor were seen at the poster launch of Brahmastra. The outfit they carried was adorable and stylish. Alia was wearing a glamourous gown while Ranbir was carrying a casual black look. 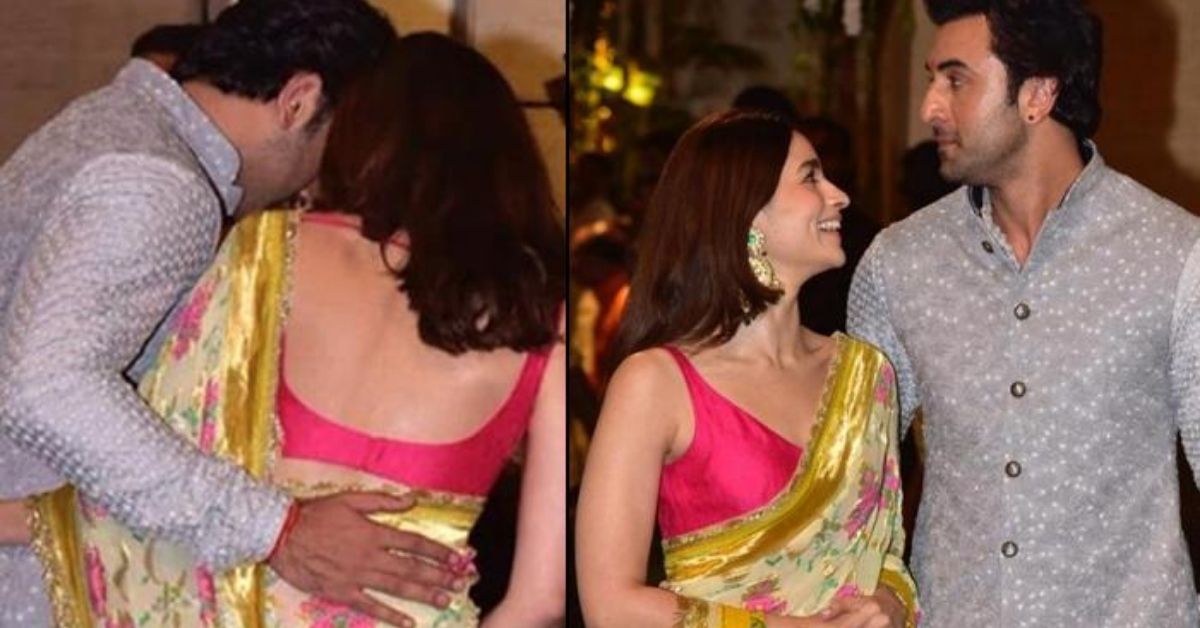 Alia Bhatt and Ranbir Kapoor attended the Ganesh Chaturthi celebration hosted by Mukesh Ambani in September 2019. The couple was appreciated across social media for their perfect outfit choices. Alia was seen in a floral print saree while Ranbir Kapoor was carrying a light-hued kurta set.

6 . The wedding reception of Arman Jain and Anissa Malhotra 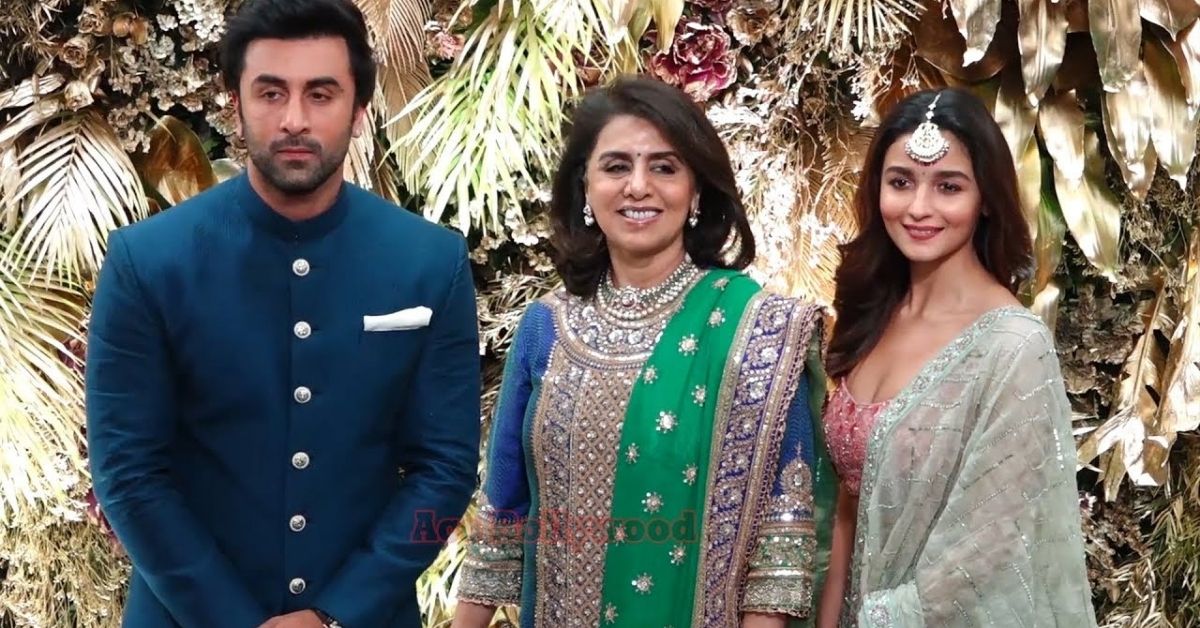 Ranbir and Alia wore the exclusive ethnic outfits are the wedding reception of Armaan Jain and Anissa Malhotra. Alia was carrying a glitter dazzling pink and mint green lehenga while Ranbir was dressed up in a blue band gala set. The couple was looking extremely sizzling. Neetu Kapoor was adding more glam by creating a mixed match effect with the couple.

The Kapoor family celebrated Christmas lunch together in 2019. During this time, Alia Bhatt and Ranbir Kapoor were seen in a casual look complementing each other. Both carried simple and pastel hues. Ranbir Kapoor was seen carrying a white tee with khaki pants and a denim jacket. While Alia Bhatt was seen in a printed dress with midriff cutouts. She carried simple makeup, kept her hair open, and she completed the look with strapping heels.

The couple has been snapped on different occasions carrying casual outfits. The outfits they carry are super cool and are always complementing each other. The best part is they look so adorable and cute together.

Alia Bhatt and Ranbir Kapoor made it official. The couple tied known in a private ceremony. Their outfits were so simple yet elegant. For their special day, they picked a combination of ivory outfits designed by Sabyasachi yet again complementing each other. The duo looked super cute together, Isn’t it? 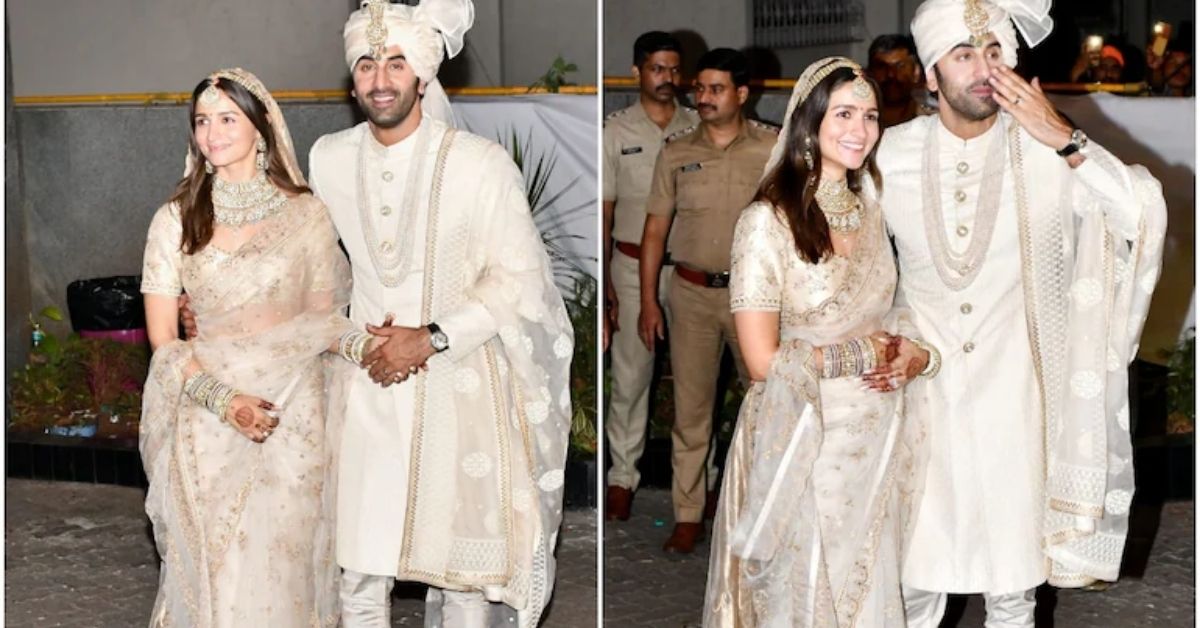 Ralia has been dating each other for the past 5 years. The news of the couple getting married excites us! So, here is a quick timeline of the couple’s adorable relationship

Alia Bhatt in Ranbir Kapoor is getting married after dating for 5 years. They are one of the finest and most adorable couples that our Bollywood industry has. Back in 2014 Alia Bhatt reveal that she saw Ranbir Kapoor for the first time on the sets of black when she was 11.

After the incident in 2018, the couple united on the set of Ayan Mukherjee Brahmastra. The couple instantly hit it off. In 2018 Ranbir Kapoor’s mother made an appearance on Alia Bhatt’s Instagram and since then, the rumors of the two dating each other have been circulating in the air.

At Sonam Kapoor and Anand Ahuja is getting reception the couple made their first public appearance together. Alia Bhatt also shares the photo of the duo. Alia also shares a heart will be birthday post calling his sunshine.

In 2019 Alia and Ranbir went to New York with the late Rishi Kapoor while he was receiving history maintain New York. How can we miss the cute moment where Alia made Ranbir blush by saying I love you to him at the Filmfare awards in 2019.

Both are doing great on their work front. Their first project together is yet to be released in September and people are so excited about it. We are all super excited to watch them.

We all are super excited and happy to see the duo getting married. We wish them all them a new married life ❤️

Bipasha Basu Fashion: The Best 5 Looks of The Diva