Anushka Shetty is the stage name of actress Sweety Shetty who also happens to be a model. She has acted in films based in Telugu and Tamil languages and she also happens to be one of the highest-paid actresses in the South Indian film industry.

She is one of the most highly respected actresses of the South and is often referred to as the Lady Superstar of the South Indian Cinema. She is very much talented and versatile and so let us have a look at Anushka Shetty fashion look. 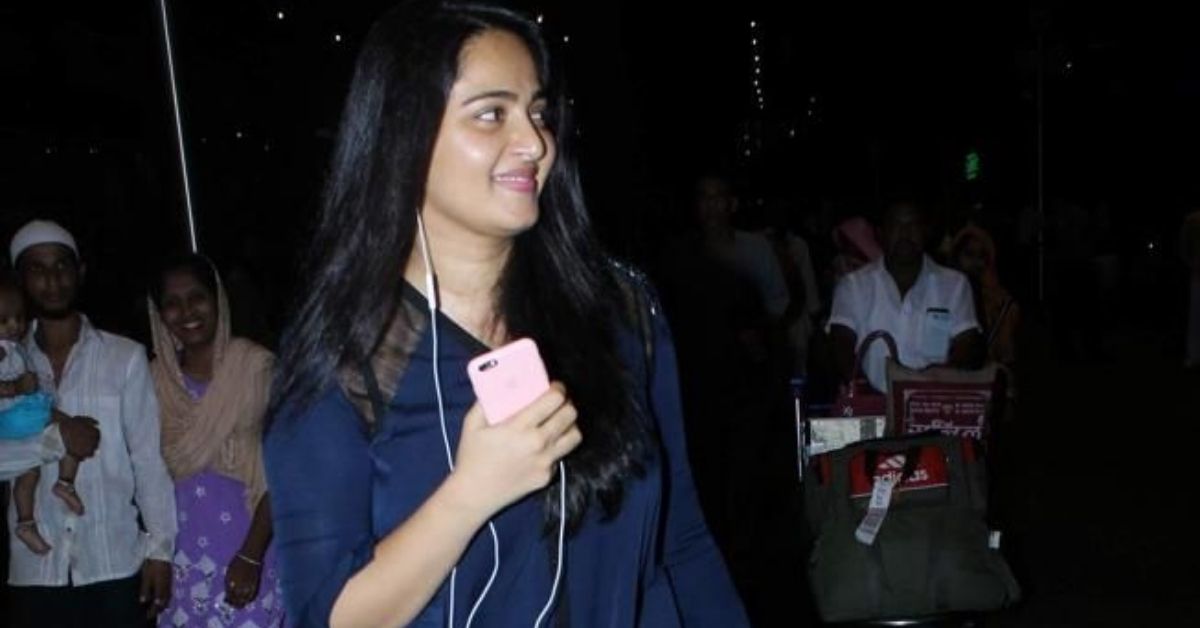 Media is a celebrity’s greatest stalker and it makes sure to capture celebrities in almost every place that they visit and the airport is one such place. The outfit of a celebrity while walking in or out of the airport is what the media wants and later they leave it up to the fashion police to judge that outfit so celebrities give their best when it comes to airport looks.

But it seems like Anushka Shetty is not bothered by the paps and their cameras and all that she wants is comfort rather than fashion while traveling. It might be for this reason that she is seen in a casual full sleeves dark blue top and black pants while walking out of the airport. With that, she wore yellow and blue strapped flat slippers and that’s it. Though this look is very plain and simple, fans admired Anushka for her simplicity and comfort in this outfit.

Well in yet another airport look of hers, Anushka is seen wearing a grey long and full sleeves top with a light blue ripped denim pants. This time too she has no makeup and she is not afraid to show her bare skin.

To add to these two airport looks is another Anushka Shetty fashion looks. She is seen this time in a black full sleeves top with buttons over it and lights blue denim pants. She has absolutely no makeup or accessories over her yet again while her hair is free-flowing. But she is wearing two small diamond studs in the ears and a pair of white sneakers and one can say that Anushka Shetty loves wearing what a lazy girl would opt for when it comes to airport looks that is comfort.

This look is what she wore on one of her birthdays while she was traveling for a work trip. She even managed to cut the cake for her fans and greeted them along with the media but one thing to note here is the fact that she preferred being casual and not fashionable on her special day which shows her simplicity and the fact that she chooses comfort over fashion.

While promoting one of her many films, Anushka Shetty preferred to wear ethnic wear this time and she was stunned in with her beauty and grace. She was seen wearing an all-black look, a full sleeves black Anarkali with netted sleeves black pants, and a black netted dupatta. She also wore a pair of oxidized earrings while her makeup was very minimal and her lips had a soft pink hint of color. Her hair was set in perfect curls and she had a small black bindi on her forehead. She also wore black high heels and she was immensely grateful in this look.

In another Anushka Shetty fashion look is seen in a floral printed ethnic attire. She is seen wearing full sleeves floral kurta with black grey netted dupatta that has a shimmery silver border towards its edge. One can notice the slightly glossy pink lips of Anushka Shetty and a pair of hanging golden earrings. Her hairdo is as simple as always but this time it looks like she has some base makeup over her face as it looks visibly brighter and even-toned than usual. With no more accessories, Anushka is the simple queen in this outfit.

While for one more pre-release of her film she wore a sky blue colored kurta that has sort of ruffles over it and netted sleeves with ruffles too. The dupatta this time was netted with a silver border and had a floral pattern in the colors red and green over its edges.

She wore cream-colored heels this time with a small-sized black bindi on her forehead, some amount of kajal on her eyes, and pink glossy lip color that complimented the blue-themed outfit well. Anushka looked like an Indian Cinderella in this outfit.

5. Saree for a naari 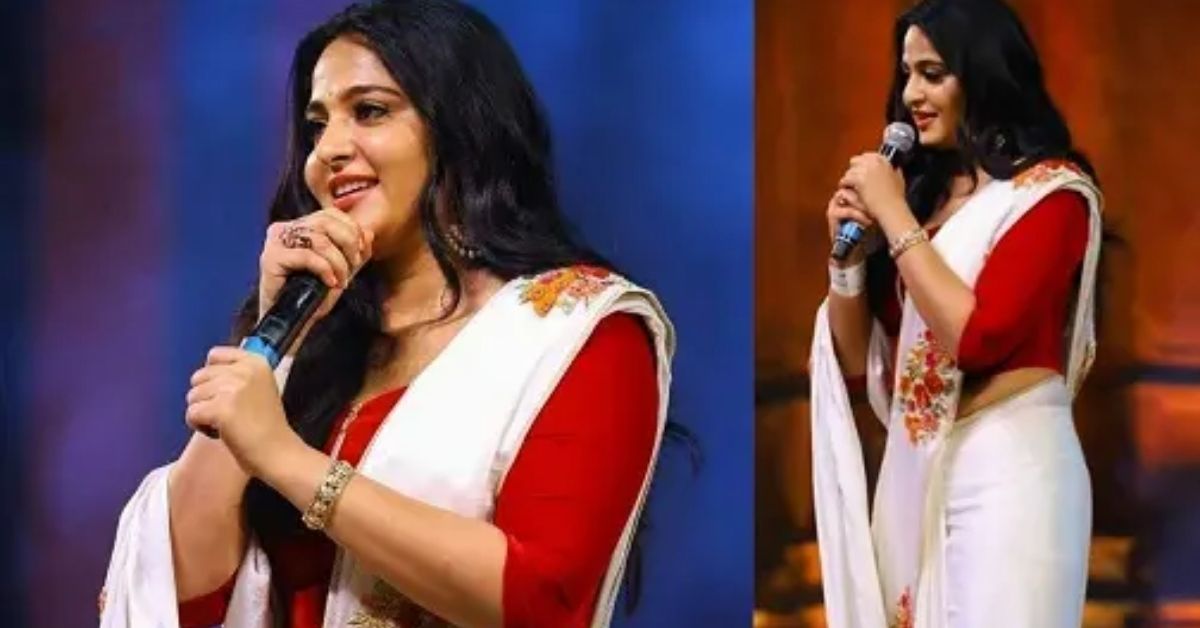 During an event, Anushka Shetty chose to wear a saree this time, and that too with a classic combination of the colors red and white that both look so royal and elegant over any person who chooses to wear them. Seen in a picture over the internet from the same event is Anushka Shetty in a white saree with red roses and orange marigold flowers embroidered over the edges of the saree. Anushka Shetty fashion is about simple yet graceful saree looks.

To go well with the saree is a red full sleeves blouse and this time Anushka has worn a fancy diamond bangle on her wrist with a pair of hanging earrings as her accessories. Red and white striped high heels and a bindi as always have completed Anushka’s look. 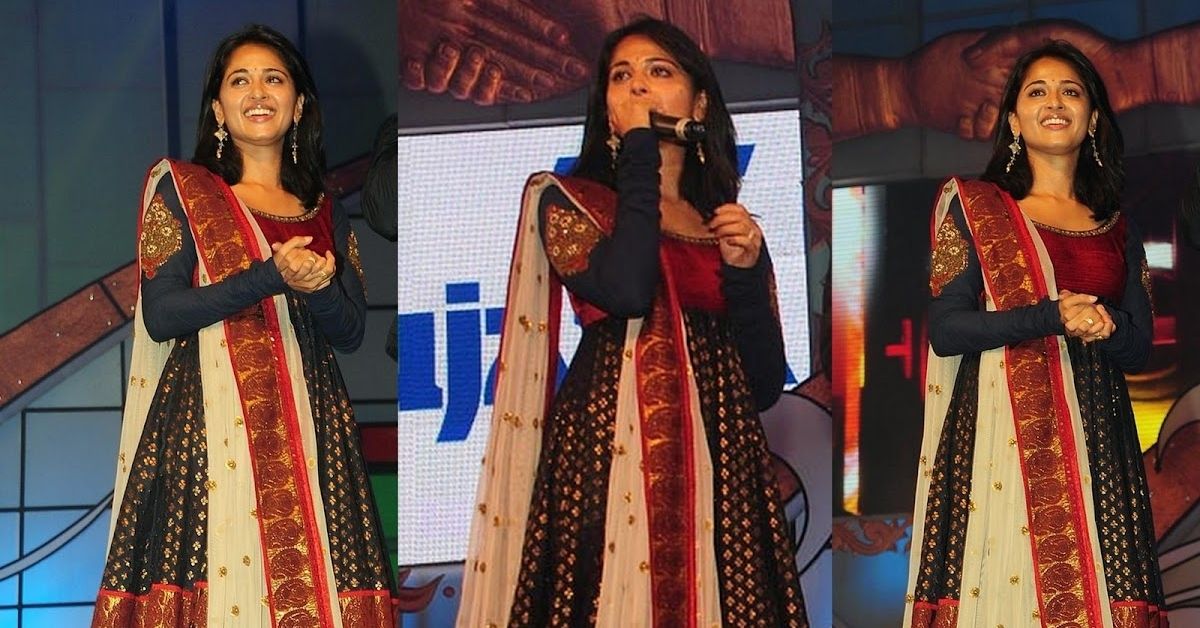 Seems like for Anushka Shetty simplicity is the only thing that matters when it comes to her outfits because, over a lot of observations and analysis of her looks, one can easily conclude that Anushka Shetty does not like to come out of her comfort zone and always tries to find the outfits that are simple looking and comfortable to wear.

In a picture that went viral over the internet, Anushka Shetty is seen wearing a red full sleeves Anarkali with a multi-colored dupatta. While the dupatta has net and beads on its interiors, it has a beige-colored border that is followed by a yellow and later a purple and a red-colored border towards the end. With that, she has worn golden earrings and golden heels and that is her look. Though simple, Anushka Shetty has aced the simple outfit game very well.

Anushka Shetty fashion sense is unique, these were some of the best outfits that we loved! So, get to know more about these and follow her!

Fast Fashion Advantages, Disadvantages And All You Need To Know

Best 10 Trending Sunglasses 2022 You Need To Have

Rhea Chakraborty Lifestyle: The Story Of Her Life