Widely known for her versatility as an actress, Meryl Streep is one of the finest actresses that the Hollywood industry has ever had. Besides, Meryl Streep fashion is also famous globally. She also has the ability to adapt to any accent which is phenomenal.

Mary Louise Meryl Streep is an American actress known to be one of the most dedicated and best actresses of her generation. Apart from her acting skills, Meryl Streep fashion is also quite remarkable. A look through some of her public appearances reveals that she prefers simplicity and decency in her fashion game and that indeed keeps her in her comfort zone.

Now, let us have a look at some of the best fashion looks of the iconic star Meryl Streep fashion outfits. 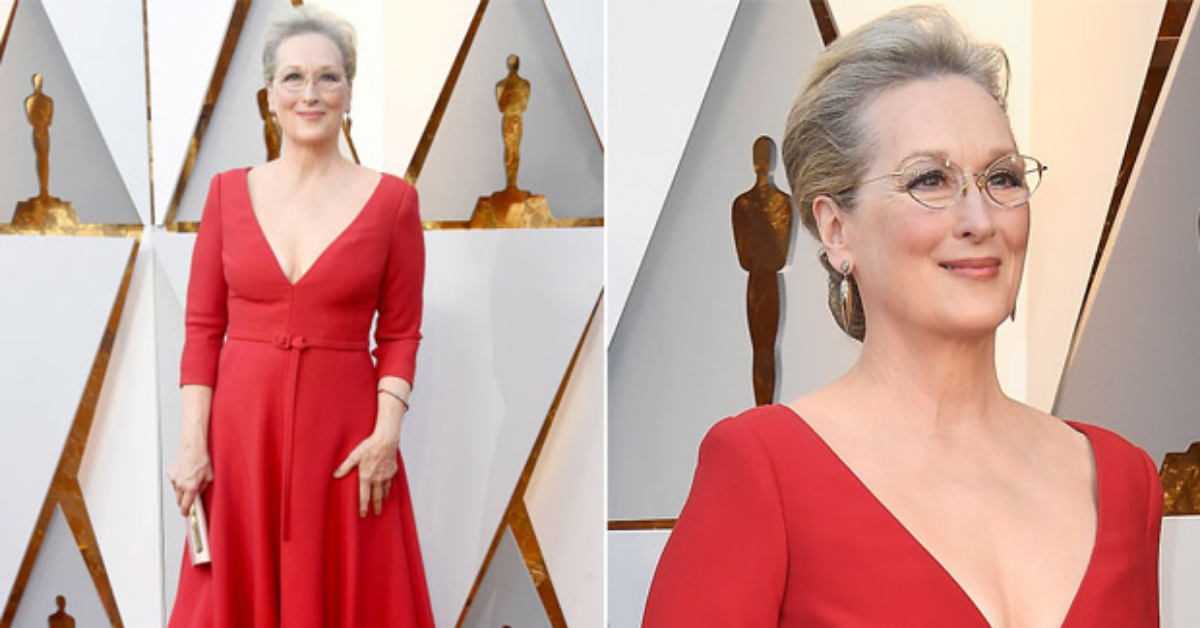 The color red has always had some sort of magic on the red carpet whenever a celebrity decides to wear it and then the rest is history. The same was the case for Meryl Streep during the Oscars in the year 2018. When Meryl Streep was stunned in a bright red gown which later made the nation turn her into a subject of memes on social media.

The red dress had a V-shaped deep-cut neckline while it had a simple fairy bottom. The dress was relatively quite simple and plain but it was the color red that popped up.

Meryl chose to tie her hair back in a bun while she wore a pair of simple red earrings and her usual pair of glasses. She only added a silver clutch bag to accessorize her look Then, she managed to slay in such a simple but elegant look. Meryl truly looked graceful in this look.

The bold and dramatic black color is often a color chosen by women to feel confident and elegant. While walking the red carpet and while appearing on stage. It seems like black too has the ability to add glamour and charm to a person who chooses to wear it. In the year 2012, Meryl Streep decided to wear the color black for presumably the same reason for the Golden Globe Awards.

Meryl Streep preferred to wear an Alessandra Rich collared black dress with a black leather belt and a black leather wrist band. While tying her blonde hair in a bun and flaunting her bangs, the golden patchwork below the collars of the dress was a definite show-stealer.

Meryl Streep is one actress who knows how to balance her look well and how to stick to the concepts of simplicity and elegance. 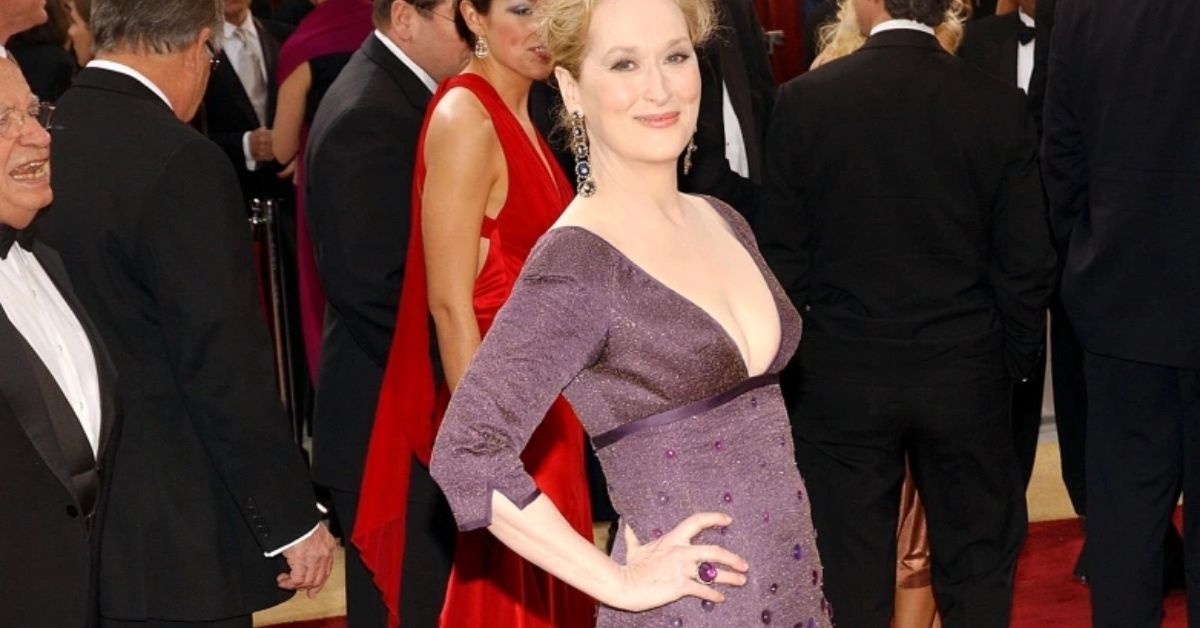 A fact about Meryl Streep fasion is that the audience has received and witnessed most of her iconic looks during the Oscars. So, it might not be wrong to say that the Oscars bring out the best of fashion from actress Meryl Streep. That she never usually fails to impress the fashion critics and the audience as well as her fans.

In one of her appearances at the Oscars, Meryl Streep was seen wearing a grape-hued Rogelio Velasco dress. She looked mind-blowingly fantastic in it. The deep V-shaped neckline and a cluster of violet flowers at the bottom of the dress amazed the audience and the paparazzi.

With a purple and gold clutch bag and a pair of earrings of the same colors, Meryl preferred to have her hair tied in a bun as usual but this time in a sort of a messy bun.

4. A breath of fresh air

Movie premieres are an integral part of the actress’s life and so no one can afford to have a fashion disaster in such a situation. In such a case it is always best to wear something that one is comfortable in and it is also very classy and easy to pull off. The same is what Meryl Streep did during the London premiere of her movie Mama Mia!

She wore a Donna Karan red dress which was a satin, mid-length dress with a V-shaped neckline and she paired it with a black three stripped leather belt. She also added a pair of golden hoops to the look and as a breath of fresh air, this time Meryl preferred to have her hair tied in a mid ponytail. She added a chic pair of brown oversized sunglasses to the look. The best part was that she wore Christian Louboutin heels with this dress. 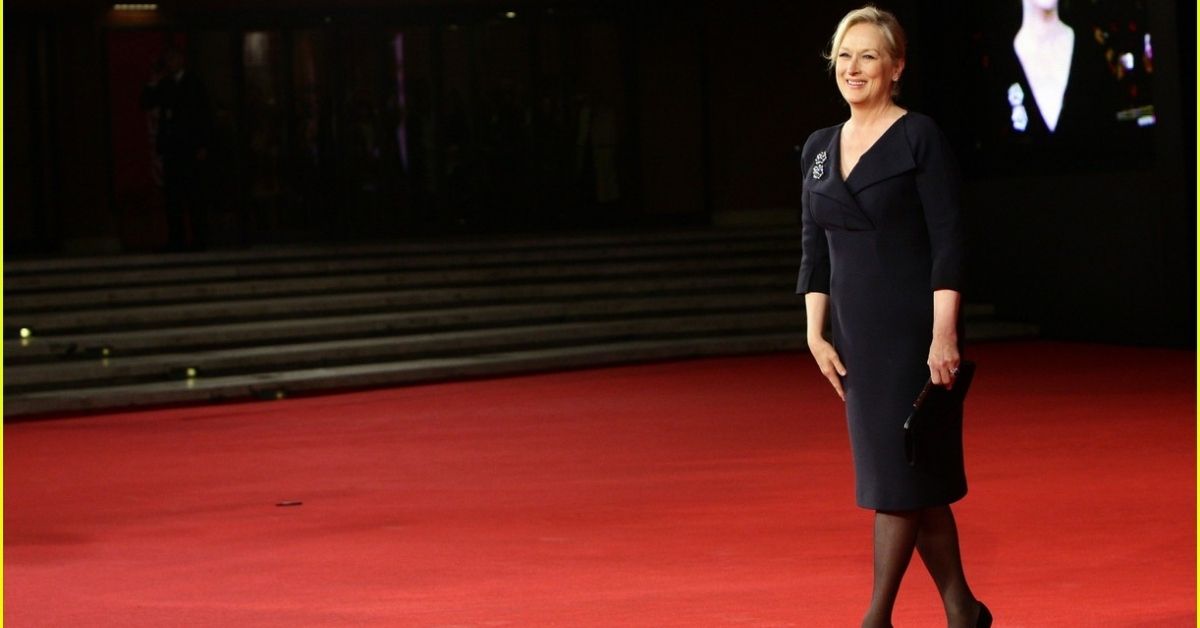 During the closing ceremony of the Rome Film Festival, Meryl Streep chose to wear a long black gown with a U-shaped neckline and a figure-hugging mermaid tail. To enhance the beauty of the dress, Meryl added a diamond necklace with green emeralds over it and a pair of huge diamond bracelets on her wrist.

A mini black handbag and her hair tied in a side partitioned sleek bun. This time Meryl even paid attention to her makeup to just perfectly match her attire.

The color white definitely brings in the cool and peaceful kind of vibes. While keeping the positivity and confidence intact in the person and this is the same mantra that Meryl Streep applied. During one of the Golden Globe Awards wherein she wore a white draped gown by designer Chris March and she looked absolutely stunning in it.

A black and white zebra printed bracelet, a pair of huge diamond studs, and a sparkly silver clutch bag were what made the whole look so special and memorable indeed. 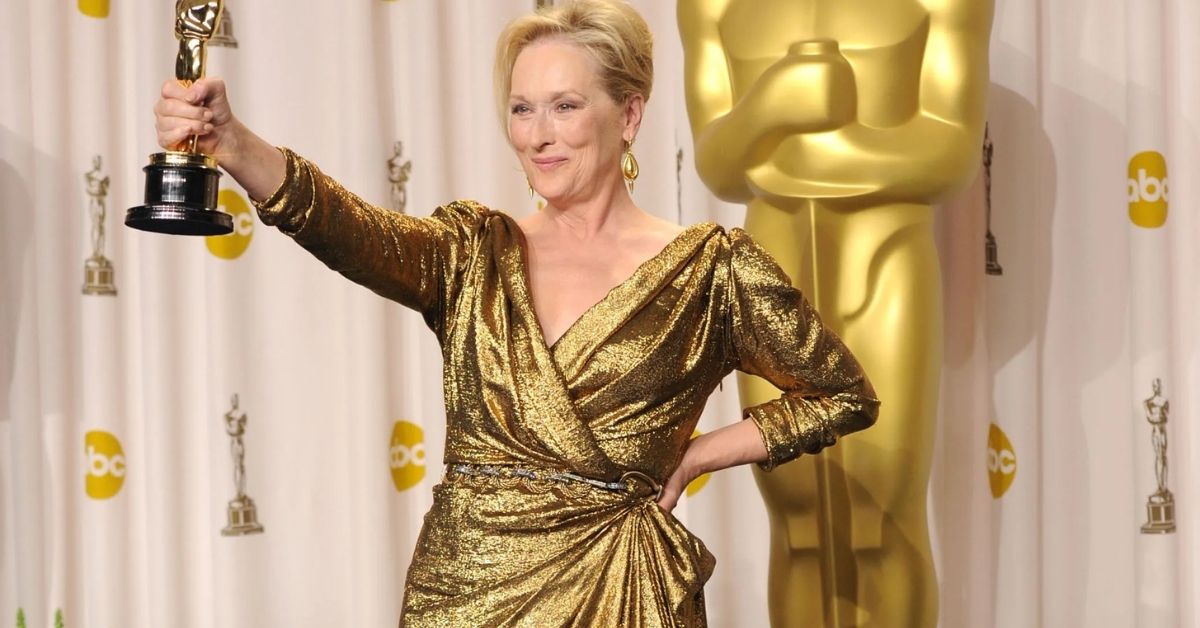 During her 2012 appearance at the Oscars, Meryl Streep fashion outfit was a golden-toned Lanvin gown. The V-shaped neckline along with the metallic effect of the pleated outfit. She looked mesmerizing and Meryl looked breathtakingly beautiful in it.

She wore matching heels, a white and gold clutch bag, and golden hanging earrings to compliment the dress. Her beautiful smile was more than enough for making this look a memorable one.

8. Wiping away the Monday Blues

During one of her appearances in the year 2014, Meryl Streep wore a navy blue and black strips Stella McCartney dress with black leather Salvatore Ferragamo heels, a black leather Christian Louboutin clutch, and Jorge Adeler jewelry. She even added a pair of black sunglasses to the look and mind you she looked absolutely gorgeous in them.

Meryl Streep Fashion is unique and quirky. With the right blends, colors, and textures she knows how to nail every outfit whether it is an oscar look or a celebrity get-together. She is lovable!

Shruti Hassan Fashion: A Quick Glimpse of Her 9 outfits