Sonam Kapoor fashion has never failed to create a headline. Also, known as Sonam Kapoor Ahuja is a famous Indian film actress and a fashion icon to a lot of people in the industry and outside the industry as well.

Though she lacks the skills needed to be a good actress, she is very vocal and is better at her fashion game rather than acting. Sonam Kapoor in sarees is the best inspiration to a lot of young girls out there who would like to try different styles of wearing a saree with different accessories and makeup, etc.

She once made it to the headlines when her name was featured on Forbes India’s Celebrity 100 list. Her name was featured on that list on the basis of her popularity and income. Before, venturing into the field of acting, Sonam Kapoor worked as an assistant director under Bollywood’s renowned film director, Sanjay Leela Bhansali.

Sonam Kapoor Fashion: The best 8 Outfits of the fashionista 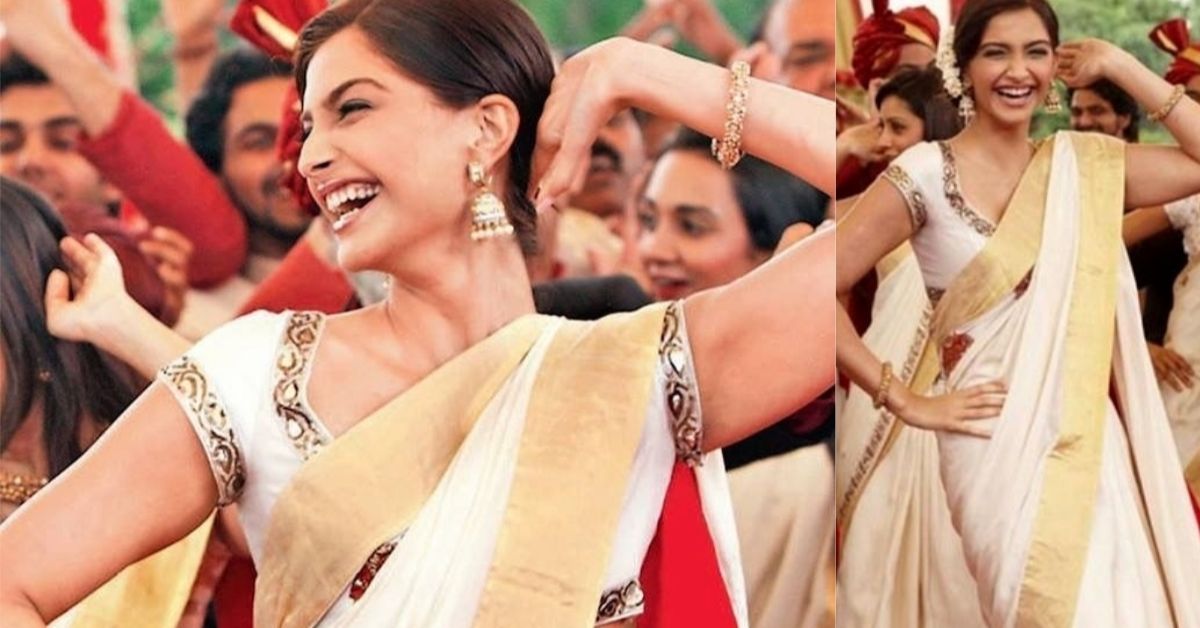 Well, let us not forget the fact that the Bollywood film Aisha is the one that made us realise that Sonam Kapoor is an absolute style icon in the film industry and has the best fashion advice if not acting advice. In a throwback picture that she shared on her Instagram account, Sonam is seen in a typical white South Indian saree with a huge but subtle golden border. There is no denial that Sonam Kapoor in saree looked so magical.

Her white blouse has a very darkish golden pattern over it and overall the look has been kept simple in order to make it look like an Indian bridesmaid look by adding a side bun with flowers over it, matching earrings and bangles and very light makeup so as to keep the focus on the saree. This might be the perfect look for all those bridesmaids who want to look stylish and glamour but make sure that they do not steal the thunder of the bride. 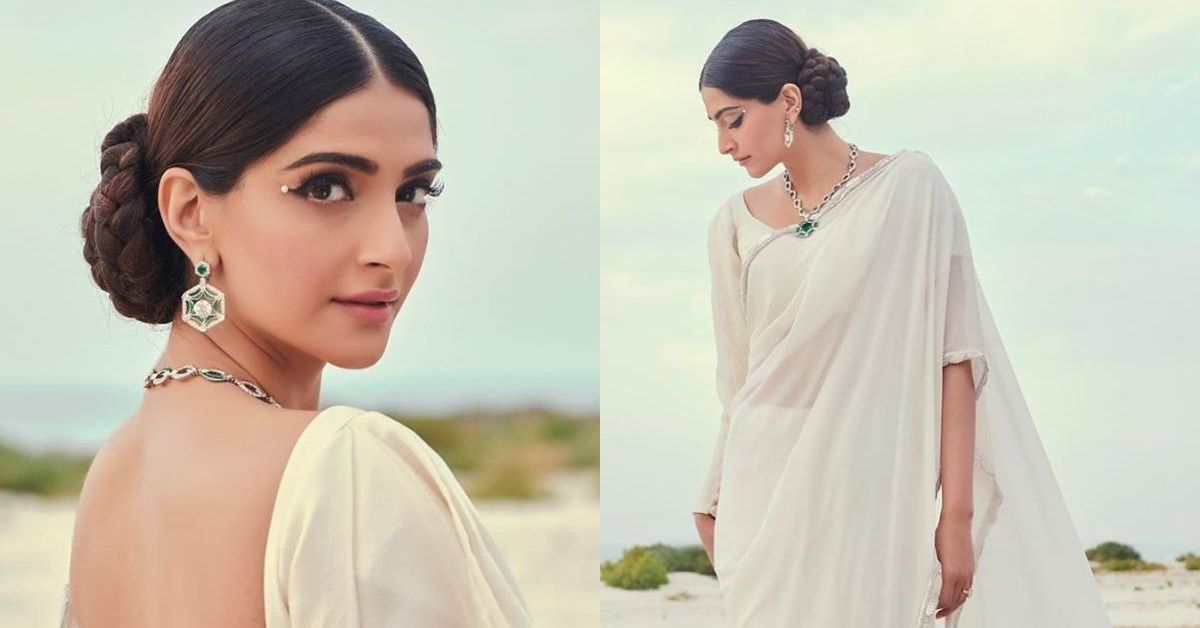 Well, it is a known fact that Sonam Kapoor Ahuja cannot do without luxurious designer outfits and her posts are evidence of that. In a picture shared by Sonam on her Instagram account, she is seen wearing an all-white saree look while launching the jewellery collection of a brand.

Her deep back white blouse with puffed-up sleeves and all plain white saree with silver scales like structures at the bottom look really classy and elegant. Her hair tied in a bun in the chicest way with her eyeliner being on point makes the whole look seem very gorgeous.

A white saree with medium-sized golden beads on it and a silver pattern on the end (pallu of the saree) with a silver lining on the border that has been coordinated with a white blouse with silverwork that is not really similar to the one on the saree. A huge necklace and a pair of traditional earrings, a potli bag, winged eyeliner and the hair curled in the best way possible.

Well, this look should have been definitely featured in Kapoor’s film, Prem Ratan Dhan Payo as it was a movie based on the lives of the royal family of Rajasthan and this look of Sonam really matches the royal vibes as she looks breathtakingly beautiful in it. 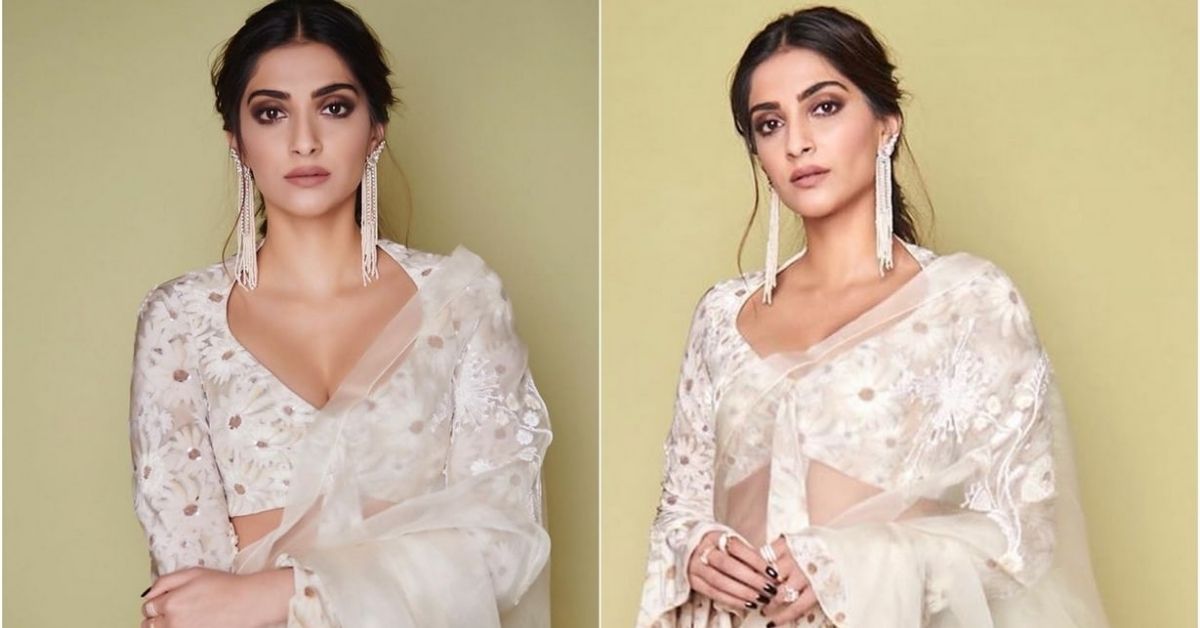 In this look, Sonam can be seen wearing an off white blouse with white flowers over it and with long sleeves, this blouse is also perfect to be worn as a crop top, especially during the summer or while going to a beach. The netted off white saree with a white pattern at the bottom is truly very elegant. The long chain-like earrings are very fancy and go well with the look. Smokey eyes, a dark matte lip and perfectly done hair are what make this look worth your attention.

5. White is all that matters 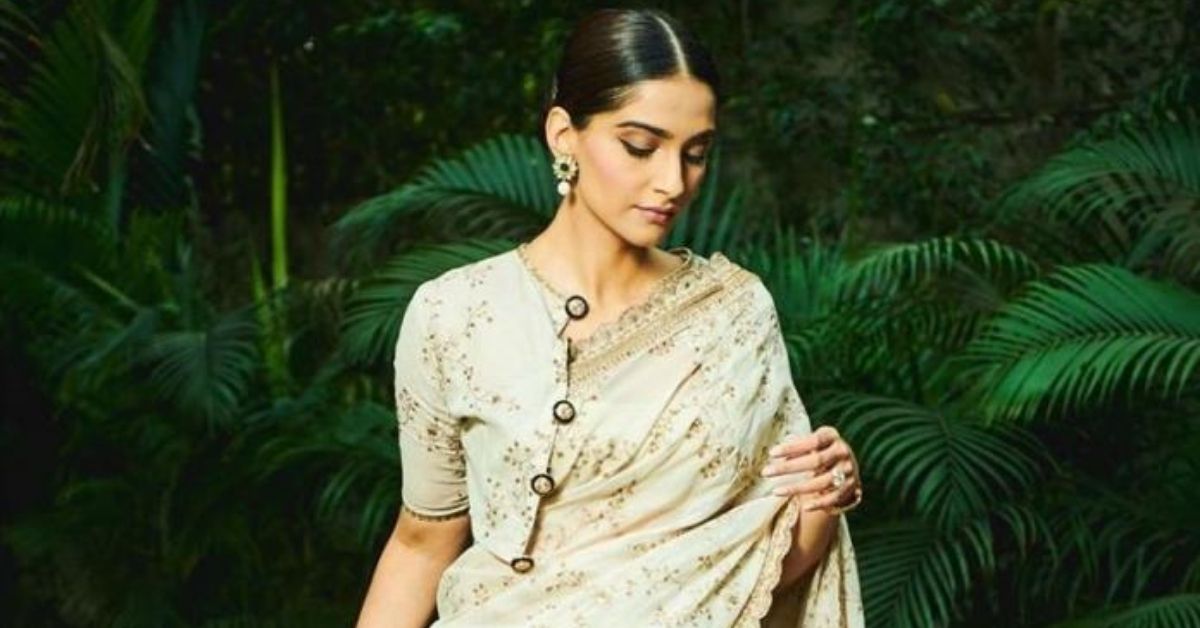 Believe it or not, literally every single look of Sonam Kapoor in saree is evidently in the colour white and this is what that matters. While sharing a quote by the great Indian leader Mahatma Gandhi, Sonam Kapoor is seen flaunting a saree by ace celebrity designer Sabyasachi Mukherjee.

This must be a very exciting shoot for Sonam as Sabyasachi Mukherjee is one of her most trusted designers to whom she is also a loyal customer. In the look, Sonam is seen wearing a white saree with light floral patterns scattered all over it and a golden work towards the end of the saree. The similar printed blouse with buttons adds a modern twist to this traditional saree look. With minimal accessories and makeup, Sonam looks simply beautiful in this picture. 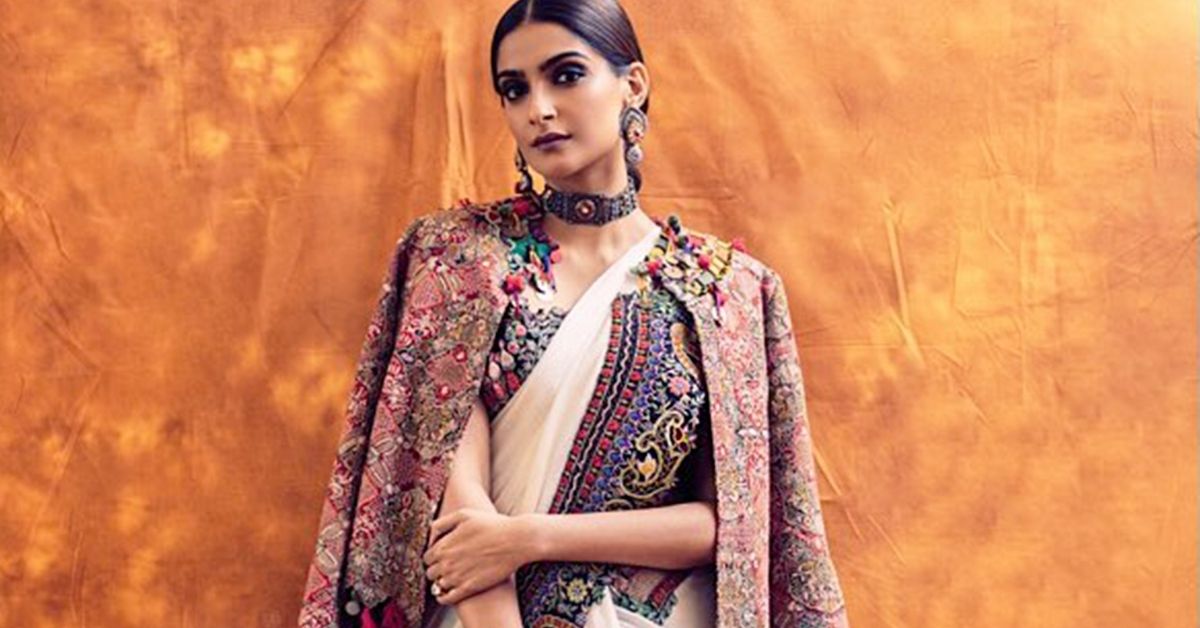 Through her posts on sarees, Sonam Kapoor Ahuja has unofficially declared to be in love with sarees and that sarees are her best friends. In another picture shared by Sonam, she is again seen wearing a white saree for ace designer Anamika Khanna.

7. A dose of the greens and their nutrition 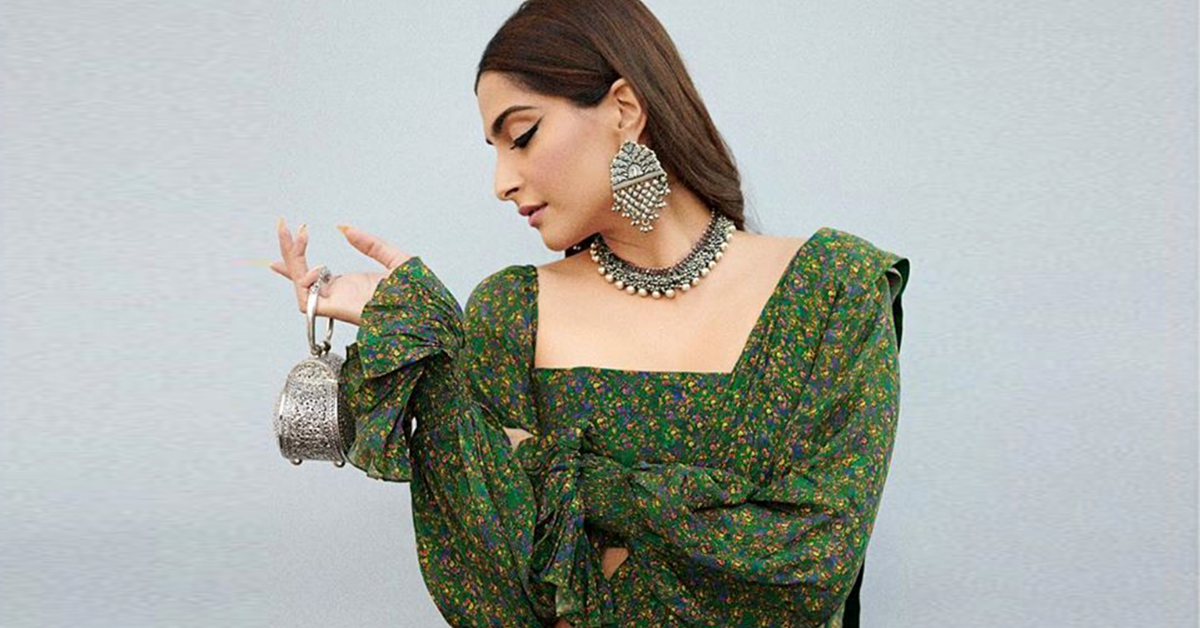 Finally, there is a loom that does not seem to include even the tiniest bit of the colour white to it. In this picture, Sonam Kapoor Ahuja is seen in a complete green look with oxidized jewellery to keep up with the trends and fashion in her field of specialization, that is fashion itself.

Sonam can be seen wearing a dark green floral saree with the same printed blouse that has full sleeves and has a bit of current fashion added to it as you can see its sleeves at the end. With her hair open, eyeliner on point and her signature no-makeup makeup look, this is the perfect dose of green nutrition to the eyes that was much needed after seeing Sonam Kapoor in a bunch of only white coloured saree.

A picture posted by Sonam Kapoor in saree back in the year 2019, created a buzz. She was seen wearing a white saree with a red face like structure over it and black lines that separate these structures from one another and account for a good border for this saree.

The high neck full sleeves blouse which is of the print as the saree stands out due to the presence of the golden necklace on Sonam’s neck a red lip colour and a red flower in the hair make this look seem more like a valentines day look but the structures over the saree seem to oppose this idea.

These were some of the best Sonam Kapoor in saree looks that we all love. Overall one thing that we forgot sure that Sonam Kapoor Ahuja can style the best and worst outfits in a way that they look good on her and she ends up getting compliments from the rest of the people regarding her sense of fashion and beauty standards.

A Look at Prajakta Koli Lifestyle And Her Best 5 Looks

Nail Paints That Go With Everything: A Quick Guide